Tuesday, 26 May 2020
You are here: Home Local nonprofit, others sense momentum for medicinal cannabis 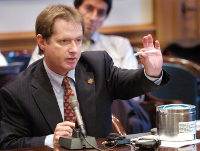 Rosenfeld no longer takes any of those medications to curb the effects of his disease, multiple congenital cartilaginous exostoses.

“Without cannabis, most likely I would be homebound and on disability. That’s if I was alive,” Rosenfeld said this week in a phone interview. “It has literally made my life bearable.”

The 56-year-old has been in the program nearly 30 years, during which time he has continued to push for cannabis to be legalized for medicinal use.

Rosenfeld is not alone, as there has been a surge in recent months by pro-medicinal cannabis activists pushing for changes in law.

One local activist group, Patients Out of Time, for years has been at the forefront of the fight to make cannabis legal medicinally.

Based in Nelson County, just across the Albemarle line, POT is run by Al Byrne and Mary Lynn Mathre, and Rosenfeld is on the group’s board of directors.

They think that, with a presidential administration that appears to be open to their cause, now is the time to win the fight to make cannabis a legal medication — and they believe the change can come at the federal level. Yet there are still many activists and government agencies that condemn marijuana as a dangerous drug that should remain illegal.

When Byrne was a youngster, his father told him marijuana was evil and his son believed it.

When Byrne was 22, his father was diagnosed as having liver cancer, and eventually succumbed to the disease.

and a doctor told the younger Byrne to get his father marijuana.

After smoking marijuana, Byrne said, his father was able to eat and hold the food down.

Byrne, a Navy veteran who is now 66, has been a believer in medical marijuana ever since.

Mathre, who for two decades was an addiction specialist consultant with the University of Virginia Health System, had similar experiences as a Navy nurse who has seen patients treated with medicinal marijuana. She has also written articles and books on medicinal cannabis.

Both have testified in front of agencies and in court hearings in favor of medicinal cannabis.

In the 1980s and ’90s, Byrne and Mathre were on the board of the National Organization for the Reform of Marijuana Laws.

In 1990, the couple helped to orchestrate a conference at which several of the federal medicinal marijuana patients spoke. It was covered live by C-SPAN.

“And Mary Lynn and I realized we were onto something,” he said. “Patients were the key.”

So the couple informally started their own activist group, which in 1995 officially became POT.

In 2000, the couple began hosting conferences touting the legitimacy of medicinal cannabis research, something the federal government for years has said didn’t exist.

They have held three conferences. The last, in 2004, was held in Charlottesville and co-sponsored by the Virginia Nurses Association, the Pain Management Center and UVa’s medical, law and nursing schools.

Byrne said he has made it a point over the years to stay in the federal government’s face on the issue.

He and Mathre now see real potential that the fight can be won.

For more than 30 years, cannabis has remained a Schedule 1 drug, meaning it is considered to have the highest potential for abuse; there is no medically accepted use for it; and it is unsafe for use under a doctor’s supervision.

“The myth out there by the government and people who believe the government is that [cannabis] hasn’t been recognized as a medicine yet,” he said. “There is no logical explanation for the government’s approach.”

He said research has proven cannabis’ medicinal value, noting a study sponsored by POT in which four of the federal Compassionate Investigational New Drug program patients were thoroughly tested and the results showed that cannabis helped relieve their symptoms with minimal side effects.

There also is the Center for Medical Cannabis Research at the University of California, San Diego School of Medicine.

Researchers there have reported positive results of smoked marijuana in HIV patients and in a study focused on alleviating nerve pain, for instance.

There is much more medicinal cannabis research being conducted worldwide.

But others are not convinced of cannabis’ medicinal value or they believe science can isolate the herb’s medicinal properties and thereby create a safe drug.

“My stance on marijuana is it is not a benign drug that people equate it to be,” he said. “It’s a drug that intoxicates people who make bad choices.”

He admits that cannabis seems to help some with their health problems, but said science can, and has in the form of Sativex, isolate marijuana’s medicinal properties without the need to smoke it.

Sativex is a cannabinoid-based oral spray that was developed by United Kingdom-based GW Pharmaceuticals, and it has been approved for use by multiple sclerosis and cancer patients in Canada. It also is currently undergoing late-stage studies in the UK and in the U.S., according to GW’s web site.

Steiner believes pro-medicinal cannabis advocates are afraid of Sativex, which he said could be “the nail in their coffin.”

The Food and Drug Administration and the Drug Enforcement Agency also are not convinced of cannabis’ medicinal value.

The DEA Web site section on its stance concerning cannabis (last updated in May 2006) clearly states that the department does not believe marijuana has any medicinal value.

“Legalization of marijuana, no matter how it begins, will come at the expense of our children and public safety,” the site says. “It will create dependency and treatment issues, and open the door to use of other drugs, impaired health, delinquent behavior, and drugged drivers.”

Mathre and Byrne believe the federal government for too long has used propaganda and lies to keep cannabis illegal.

Still, Byrne believes it is only a matter of time before medicinal cannabis is legal on the federal level.

“We’re about to win here in the United States,” he said. “We have the science.”

Recently, there appears to have been a shift in medical marijuana attitudes.

Legislation to make medicinal marijuana legal is pending in four states. There are 13 states that have legalized medicinal marijuana. (Virginia has a law, passed in 1979, that permits doctors and pharmacists to prescribe marijuana to cancer and glaucoma patients, but because marijuana is illegal federally, there is no legitimate way for the drug to be prescribed.)

In March, U.S. Attorney General Eric H. Holder Jr. said the Justice Department would no longer raid marijuana dispensaries that comply with state laws, a reversal from the Bush administration.

Significant hurdles remain, however, and Jon Gettman knows this better than most.

Gettman, the leader of the Coalition for Rescheduling Cannabis, has filed petitions with the DEA to have cannabis rescheduled.

His original petition in 1995 was denied on a technicality. But he refiled the petition in 2002.

The newer petition has stalled for years, but he said last week that a decision could come sometime this year.

He said the petition relies on some 350 scientific research articles and clearly spells out that cannabis should not be a Schedule 1 drug.

The ultimate decision will be made by the U.S. Department of Health and Human Services, which currently is considering his petition, said Gettman, a senior fellow at the George Mason University School of Public Policy. He also teaches courses at three other universities and is a writer, researcher and policy analyst.

“We do expect some movement in the near future,” he said.

Yet, he acknowledges that with the Barack Obama administration stuck in the long process of filling positions, there could be more delays in a decision.

Either way, he is more confident in his case than in the past.

“We think we have a pretty good case,” he said. “I’m confident in the science and the law.”

While marijuana is habit forming for some and has negative side effects for others, Gettman said it is more comparable to Schedule 3 and 4 drugs, which are legal for medicinal purposes.

Like Gettman, Byrne and Mathre, Rosenfeld believes others will eventually be allowed to do what he has been doing for nearly 30 years — legally use medicinal cannabis.

“We will persevere,” he said. “We will win. It’s right