Wednesday, 2 December 2020
You are here: Home Cannabis Cafes in Dutch Border Region to Go Members Only?

All of the cannabis cafes in the Dutch border province of Limburg may be turned into members-only clubs in a bid to stop “drug tourism,” the Dutch newspaper Volkskrant reported over the weekend.

Limburg hosts 30 of the cannabis cafes, also known as coffee shops, that attract thousands of visitors from the less cannabis-friendly neighboring countries of France, Belgium and Germany each year. The influx of foreign pot buyers has resulted in problems ranging from traffic congestion to public nuisances to dealing of hard drugs. 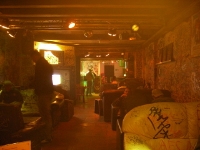 Under the Leers proposal, foreigners would not be barred from membership in the clubs, but would have to wait several days to buy cannabis. The proposal would thus discourage spur of the moment cannabis purchases, but would not prevent foreigners who plan ahead from being able to purchase cannabis once they have become members.

Leers’ proposal also foresees banning cash sales, which would allow all sales to be traced, thus discouraging foreigners. Leers is also proposing reducing the amount of cannabis that can purchased from five grams to three grams. He said few foreigners would bother to drive to Holland for such a small quantity. [But Leers did not explain why foreigners would bother to drive to Holland to purchase only two grams more now, or what would stop them from visiting multiple cannabis cafes in a European version of smurfing.]

According to the Volkskrant, the Dutch home affairs and justice ministries have reacted favorably to the plan. While the conservative Dutch government would like to eliminate cannabis cafes altogether, it has pledged not to act until after elections next year. In the meantime, effective regulation of the cannabis cafes is in the hands of local authorities, such as Maastricht Mayor Leers.

Cannabis cafe owners declined to discuss their views on the proposal. They said they would wait to react until the proposal is formally presented May 12.