BANGKOK (AP) —The war on drugs has been a failure and nations should take a softer approach in dealing with addicts by providing them with access to treatment and respecting their human rights, a top UN rights official said on Tuesday. 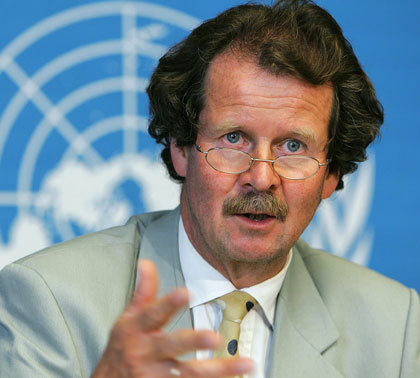 Manfred Nowak, special rapporteur on torture for the UN Human Rights Council, told The Associated Press that many countries take a punitive approach to dealing with addicts. They lump the addicts in with traffickers and have laws that sentence them to lengthy prison terms or even death with little or no access to treatment.

Singapore, for instance, canes drug users while still others deny users treatment or access to drugs in order to force confessions from them, Nowak said in a phone interview, after attending a drug  policy conference in Bangkok called Harm Reduction 2009.

“We need a paradigm shift. We have to get away from a punitive approach and replace it with a human rights-based approach,” Nowak said of drug policies. “As the war on terror failed, so has the war on drugs failed. We don’t have less drug users and drug traffickers than when the war on drugs started in the 1980s.”

He said international drug policies are among the leading causes of “human rights violations.”

Nowak said there are some countries, especially in Europe and South America, that are shifting away from a punitive approach, offering needle exchange programs and drug substitutes like methadone treatment. But Nowak said many others, led by the United States, Russia and countries in Asia, continue to toe a hard line, though he hoped the US policy would change under President Barack Obama.

“These are policies that regard drug users as criminals, rather than persons who are actually in need of medical treatment,” Nowak said. “In quite a number of countries particularly in Asia, prisons are overcrowded with drug offenders.”

He said the slow pace of change could be seen on the UN’s Commission on Narcotics Drugs in Vienna, the main UN body that deals with drug policy. He said efforts to introduce non-punitive policies and those dealing with human rights have been rejected by the Commission.

“According to the United Nations system, human rights should form an integral part of policies and that has been implemented in security, development and other areas,” he said. “But not in relation to the international drug policy.”

Nowak’s criticism of global drug policy follows a report last month by the billionaire philanthropist George Soros’ Open Society Institute, which also called for fresh thinking on the issue. The report found the tougher stand against drugs worldwide has led to a spike in rights violations, increased incarceration rates and the spread of disease without cutting down on the demand for narcotics or the numbers of people who use them.