Wednesday, 29 January 2020
You are here: Home Mayor to attend rally for medical marijuana

Local medical marijuana advocates have at least one friend in high places. 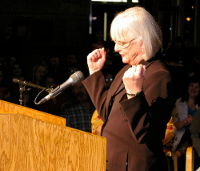 That would be Mayor Kitty Piercy, who will attend the Global Marijuana March rally Saturday at the old Federal Building at Seventh Avenue and Pearl Street.

Pro-pot Web sites are buzzing about Piercy’s upcoming appearance at the event — as well as her decision to issue a formal proclamation marking today through May 6 as “Medical Marijuana Awareness Week” in Eugene.

“Eugene has always been a place for — for lack of a better word — marijuana enlightenment,” said Allen St. Pierre, executive director of the National Organization for the Reform of Marijuana Laws, or NORML, based in Washington, D.C.

“But for a sitting mayor to come out and be this public about it is really rare,” St. Pierre said. “Not many of her peers are coming to events about reform.”

Piercy emphasized that her attendance at the rally — where she’ll stand behind a microphone and read the proclamation — does not necessarily mean that she favors legalizing marijuana.

“I’m not weighing in on that, and this is not me leading any cause,” Piercy said. “But I’m more than willing to state my support for the legal, medical use of marijuana.”

As Piercy’s proclamation points out, Oregon voters in 1998 approved a ballot measure making it legal for people to possess, use and grow marijuana if their doctor recommends it for debilitating symptoms. Twelve other states have passed similar laws.

According to the state Department of Human Services, nearly 21,000 people in Oregon can legally use medicinal marijuana. About 2,400 of them live in Lane County.

Local medical marijuana patient Jim Grieg — who serves on the Willamette Valley NORML chapter’s board of directors — met with Piercy two years ago and persuaded her to declare a “Medical Marijuana Awareness Day” in Eugene in 2007.

Grieg, a 57-year-old Eugene resident who suffers from rheumatoid arthritis and uses a wheelchair, returned to the mayor’s office this year to request that she issue a proclamation in support of medical marijuana programs.

“It didn’t take a whole lot of convincing,” Grieg said. “I think she’s really shown some leadership qualities by doing this.”

Grieg said he asked members of the Lane County Board of Commissioners to follow Piercy’s lead, but they declined.

“It’s an issue they didn’t want to get into,” Grieg said. “It’s not something a lot of people want to stick their necks out on.”

St. Pierre agreed that “elected officials risk some political capital” by siding with people who endorse marijuana use.

“But if elected leaders really reflect the mores and values of the people who elected them, and the citizenry is OK with medical marijuana, then the politicians also should be,” St. Pierre said. “If not, there’s a disconnect.”

Piercy, who said she has a friend who used medical marijuana to gain relief from symptoms associated with ovarian cancer, realizes that some people might criticize her decision to publicly address the issue.

“Just because there are differing opinions doesn’t mean you should run away from something you support,” Piercy said.

This Saturday, Global Marijuana March rallies will be staged in 263 cities around the world, according to the event’s Web site.

Organizers will promote their support for the legalization of marijuana use by adults, and discuss benefits of medical marijuana and industrial hemp.

“This is not me leading any cause. But I’m more than willing to state my support for the legal, medical use of marijuana.”

— Kitty Piercy, eugene mayor, on why she will attend even