Saturday, 4 April 2020
You are here: Home Oakland Council Backs a Tax on Marijuana

OAKLAND, Calif. — Leaders of this economically hard-hit city are proposing to tax medical marijuana as a way to help close a record budget shortfall. 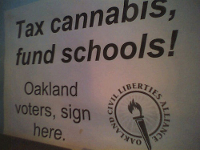 Oakland’s City Council last week approved a 1.8% tax on medicinal marijuana sold in the city. If voters pass the proposal in a July election, Oakland would become the nation’s first city to directly tax the drug, medical-marijuana advocates say.

Such an outcome would further legitimize medical marijuana in California and represent the latest victory for advocates. Prospects for such a tax were made brighter in February, when U.S. Attorney General Eric Holder announced that the federal government would no longer raid state-approved dispensaries.

Backers of the Oakland tax on dispensaries said they hope to encourage other cities to follow suit. The tax would prove “that government-regulated dispensaries are good neighbors,” said James Anthony, a lawyer who represents the Harborside Health Center, one of Oakland’s medical-marijuana dispensaries.

California is one of 13 states that have legalized medical marijuana, allowing it to be sold to people with a doctor’s recommendation. It is relatively easy for anyone over 18 years old to obtain such a doctor’s note. Advocates estimate there are 200,000 or more approved medical-marijuana users in California. Users already pay a sales tax on the drug.

A city tax on medical marijuana could generate at least $400,000 and perhaps more than $1 million annually, said Rebecca Kaplan, the Oakland City Council member who pushed the proposal. The city of 400,000 residents is facing an $83 million shortfall in a $455 million budget.

The owners and managers of Oakland’s four medical-marijuana dispensaries said they approached the city with the idea. “We wanted to further legitimize the medical-marijuana paradigm to show that we are truly willing to assist [Oakland], and to show other cities that there are social benefits to this,” said Keith Stephenson, executive director of Purple Heart Patient Center.

No formal opposition has formed against the proposal, and Ms. Kaplan and medical-marijuana advocates said they are confident voters will approve it.

But Paul Chabot, a Southern California resident who recently founded the Coalition for a Drug Free California, is opposed to the idea because he thinks the “quasi-legalization” of marijuana would add more of the drug into the black market. “It’s a front; it also sends the wrong message to children,” he said. “What are you doing to do next, allow prostitution and tax that? Allow methamphetamine to be sold and tax that?”

Write to Stu Woo at Stu.Woo@wsj.com