“While much of the recent attention regarding GW has been associated with our childhood epilepsy and cancer pain development programs, we continue to make great progress with  other pipeline programs, further demonstrating the breadth of our proprietary cannabinoid product development platform to yield interesting and therapeutically beneficial product candidates.” stated Dr. Stephen Wright, GW’s Director of Research and Development. “As GW continues to progress its clinical work with cannabinoids, our pipeline has the potential to yield, as it did with Epidiolex, a flow of exciting new product candidates in a wide variety of therapeutic areas.” 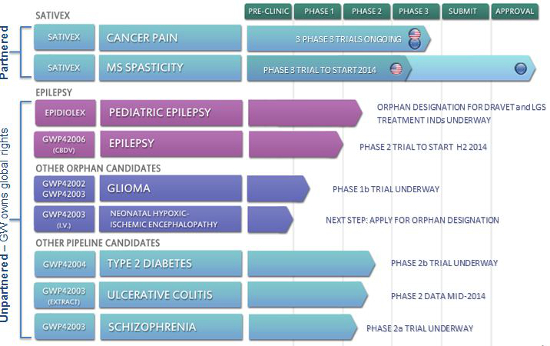 GWP42006 (CBDV) for epilepsy
GW has completed a Phase 1 clinical trial of GWP42006 to treat epilepsy. GWP42006 is a product which features the non-psychoactive cannabinoid cannabidivarin (CBDV) extracted from the cannabis plant. This Phase 1 single ascending and multiple dose pharmacokinetic and safety study in 66 healthy subjects demonstrated no safety or toxicity signals. In this study, subjects were dose titrated to investigate the maximum tolerated dose and to determine what, if any, side effects resulted. CBDV was well tolerated even at the highest tested dose and no significant side effects were observed. There were no serious or severe adverse events, nor any withdrawals due to adverse events, and all mild adverse events resolved on treatment.

CBDV has shown the ability to treat seizures in pre-clinical models of epilepsy with significantly fewer side effects than currently approved anti-epileptic drugs1. CBDV also appears to employ a different mechanism of action to currently available anti-epileptic treatments. GW expects to commence a Phase 2 study of CBDV in patients with epilepsy later in 2014, using the doses identified as appropriate in this Phase 1 study.

GW also announced that the Intellectual Property Office in the United Kingdom has granted a patent for the use of CBDV in the treatment of epilepsy, patent number GB2479153B. The subject patent covers the use of CBDV alone or in combination with standard anti-epileptic drugs or in combination with other cannabinoids, and  provides an exclusivity period until 30 March 2030. This same patent is currently in prosecution with the United States Patent and Trademark Office.

CBDV is one of two product candidates being investigated by GW in the field of epilepsy. The other candidate, Epidiolex, contains plant-derived cannabidiol (CBD) as its active ingredient. Epidiolex has received orphan drug designation from the FDA in the treatment of Dravet syndrome and Lennox-Gastaut syndrome, two infantile onset drug-resistant epilepsy syndromes. The FDA has granted expanded access INDs to several independent investigators in the U.S. to allow treatment of pediatric epilepsy patients with Epidiolex.

GWP42004 for Type 2 diabetes
GW has commenced a 12-week randomized, double blind, placebo controlled Phase 2b study of GWP42004 to treat Type 2 diabetes. GWP42004 is an orally administered product which features plant-derived tetrahydrocannabivarin (THCV) as its active ingredient. THCV is distinct from THC and does not share its intoxicating psychoactive effects. The primary objective of this study is to compare the change in glycemic control in participants with Type 2 diabetes when treated with one of three doses of GWP42004 or placebo as add-on therapy to metformin with the primary endpoint being change from baseline to the end of treatment in mean glycosylated haemoglobin A1c (HbA1c) level. The safety and tolerability of GWP42004 compared with placebo will also be assessed. This study is expected to enroll approximately 200 patients with an estimated completion date of the second half of 2015.

GW believes that if the Phase 2b study confirms the Phase 2a findings, GWP42004 would have the potential to offer a novel orally-administered treatment option within one of the largest therapeutic areas where a serious unmet medical need still exists.

GWP42003 for schizophrenia
GW has commenced a Phase 2a trial using GWP42003 to treat Schizophrenia. GWP42003 featured purified CBD as its active ingredient. The primary objective of this study is to compare the change in symptom severity in patients with schizophrenia or related psychotic disorder when treated with GWP42003 or placebo, added to first-line anti-psychotic therapy over a period of six weeks as change from baseline to the end of treatment using the Positive and Negative Symptom Scale (PANSS)2 total score. Secondary objectives are to evaluate the effect of GWP42003 on quality of life and cognition and to assess the safety and tolerability of GWP42003. This study is expected to enroll approximately 80 patients with an estimated completion date of the second half of 2015.

GWP42003 has shown notable anti-psychotic effects in accepted pre-clinical models of schizophrenia and importantly has also demonstrated the ability to reduce the characteristic movement disorders induced by currently available anti-psychotic agents. The mechanism of GWP42003 does not appear to rely on the D2 receptor augmentation of standard antipsychotics and therefore has the potential to offer a novel treatment option in this therapeutic area.

Rest of Pipeline
In addition to the pipeline programs highlighted above, GW continues to advance other programs, including:

– Sativex in Phase 3 clinical development for MS spasticity. US Phase 3 trial expected to commence in second half of 2014

2;The PANSS is a medical scale completed by a trained rater at site and is used for measuring symptom severity of patients with schizophrenia or related psychotic disorder. It is a 30 item rating instrument that assesses the positive and negative symptoms of schizophrenia as well as symptoms of general psychopathology. A PANSS total score is derived from the sum of the 30 items and the PANSS items are also grouped into three subscales: Positive (‘P’), Negative (‘N’), and General (‘G’). Individual items are rated on a seven point scale, where 1 = absent and 7 = extreme. A decrease in total score indicates an improvement in condition.