In response to the recent arrests (including one indefinite jailing) of videographers in the Keene District Court lobby, Andrew Carroll, who will be tried for his civil disobedience of publicly possessing marijuana on May 1st at 1:30pm, has stated the following on the Free Keene Forum: 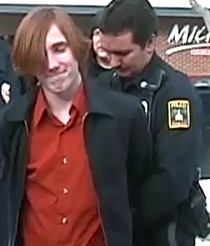 I am going to refuse to proceed with my court case (May 1, at 1:30 pm) until cameras are allowed in. Freedom of the press is too invaluable to the protection of liberty to let its blatant violation go unchallenged. I demand the officers and magistrates of the court show proper respect for the rights of individuals. Someone needs to watch the watchers.

You are all, of course, free to do as you please, but that is my plan. Sam is still in jail and the least I can do to thank him for his bravery is try to take the absurdity of all these abuses to court and challenge them there. Perhaps keep him company in Westmoreland, if that’s what it comes down to. But that decision is in the hands of the “authorities.” The next move belongs to them. Let us see how many peaceful people they will throw in jail. Andrew Carroll

Other forum posts suggest that in addition to this civil disobedience by Carroll, more liberty activists may choose to also risk arrest by recording video in the allegedly public lobby of the district court, to show support for jailed videographer and activist Sam Dodson as well as journalist Dave Ridley who was first arrested for recording in the same lobby back in March.

Activists will likely gather downstairs at 3 Washington St. after 1pm on Friday. Will the government people allow cameras in their allegedly public court, or will they continue cracking down on peaceful people attempting to exercise their supposed right to freedom of the press? Also, will Andrew be jailed over his courageous act of possessing cannabis in public? If you can’t be here in person, watch it unfold here on the blog. http://freekeene.com