Thursday, 1 December 2022
You are here: Home Is Britain Set for Its Very Own Cannabis Revolution?

The US war on cannabis is over and there’s no turning back, says US cannabis author Doug Fine as he prepares to take the stage at South Bank University. Fine is in London for the one-night UK leg of his world tour, spreading news of the “green economic revolution” currently spreading through the US, which is seeing certain states decriminalising, taxing and profiting from the marijuana industry.

“My message is this,” he says, smiling confidently, “if it can happen in the US, then it can happen here in the UK. There’s no stopping this train now.” 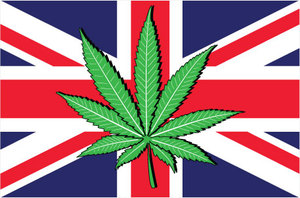 That Fine is upbeat isn’t particularly surprising. His book, Too High To Fail: Cannabis and the New Green Economic Revolution, provided a blueprint for America’s nascent medicinal cannabis industry. He chronicled events in Mendocino County, California, where Sheriff Tom Allman was one of the first law enforcers in the US to sanction regulated, organic, eco-friendly cannabis cultivation, and – in doing so – temporarily saved his state from bankruptcy.

But Fine also effectively called the market. Publishing his book as the US went to the polls in 2012, he predicted that the medicinal cannabis industry would blaze a trail through the US. Two years later, Fine’s economic “green revolution” is taking hold; the medicinal cannabis industry straddles around 20 US states and is tipped to be worth $2.34 billion (£1.45 billion) a year in 2014, exceeding the $10 billion (£6.3 billion) mark by 2018 as legalisation spreads.

On stage, Fine tells his audience – comprised of academics, activists, students and journalists – about the potential of a “green rush” in the British Isles. “Look at what’s happened in Portugal,” he says, referring to the country relaxing its laws on the possession of any drug for personal consumption at the turn of the millennium.

Fine’s visit comes at a time when governments around the world are exploring new ways of approaching and exploiting cannabis. In early October, Uruguay’s government announced that it would be the first country in the world to effectively nationalise the cannabis industry in a bid to undermine organised crime. In Europe last month, Romania legalised the use of cannabis derivatives for medicinal purposes and became the tenth country in Europe to recognise the legitimate medicinal uses of the drug, while Switzerland sanctioned possession for personal use.

Meanwhile, in Britain, the surprise appointment of Lib Dem MP Norman Baker – a former advocate of cannabis reform – to the role of Home Office drugs tsar further buoyed hopes among UK cannabis campaigners that the green rush was lapping at Britain’s shores.

But could Fine’s model for a regulated, organic, sustainable cannabis industry really take root in Britain?

Calls from both the House of Commons and Lords late last year to revisit Britain’s drug laws were promptly dismissed by one-time drug reformer, Prime Minister David Cameron. But they did spur Deputy PM Nick Clegg into ordering a review of international reform alternatives – likely looking at recent changes in America – which is expected to be published before Christmas.

The arguments for reform made by Fine can easily be applied to the UK. On a local level, it’s a no-brainer, but something that a number of politicians have explored in the past, only to end up hitting a brick wall. In April of 2012, when Green Party councillor Ben Duncan called for cannabis cafes to be licensed in Brighton, he echoed the calls of Brighton & Hove MP Caroline Lucas – and the city’s chief superintendent, Graham Bartlett – for decriminalisation. But local powers don’t stretch as far in the UK as they do in the States.

By Steve Sampson
Read the full story at vice.com