The Lebanese government will not attempt to eradicate marijuana fields blooming across the country’s Bekaa Valley, Beirut’s Daily Star newspaper reported Friday. Sources cited by the Star said it was because of the fragile security situation in the area near the border with Syria and because the government had been unable to live up to pledges to provide financial compensation to farmers whose crops were destroyed last year.

They are also up against Bekaa Valley marijuana farmers in no mood to see their livelihood messed with. 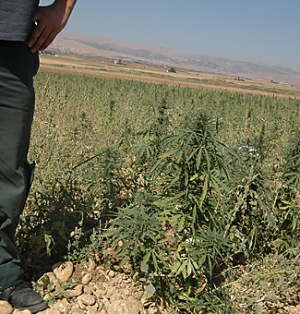 “In the absence of alternatives, we will break the hands and legs of anyone who dares destroy our crops,” one of the region’s biggest growers, Ali Nasri Shamas, told the Daily Star. “We will not be gentle with them [the security forces] like we usually are,” added Shamas, who is wanted on several arrest warrants, including on a charge of attacking the Army. “It will be a full-blown war if necessary.”

This after last year’s eradication effort led to clashes between would-be eradicators and farmers armed with rifles, rocket-propelled grenades, and mortars. Those clashes, which resulted in the destruction of bulldozers hired by the government to plow under pot fields, ended only when the government promised to pay compensation to farmers. That didn’t happen. The Finance Ministry said it didn’t have the money.

This year, although the Higher Defense Council had fighting drug cultivation on the agenda this week, sources told the Daily Star that a “tacit agreement” last month between government officials and local leaders from the Baalbek-Hermel region in the northern Bekaa meant that eradication efforts weren’t going to happen this year.

“The Army is exhausted by the roving security incidents and the farmers are poor and angry,” said a political source. “Everyone wants to avoid a major confrontation with the military. No one wants carnage.”

The Syrian civil war raging next door has led to repeated clashes inside Lebanon, especially since the open involvement of Hezbollah members in the fighting earlier this year. The Bekaa Valley is also a Hezbollah stronghold.

Lebanese hash provided funding for feuding militias in the Lebanese civil war between 1975 and 1990, and grow into a multi-billion dollar industry before the government cracked down under international pressure in the late 1990s. But its eradication campaigns have often generated violent clashes, and promised alternative development schemes have failed to materialize.

Now, the marijuana fields are back in a big war. The Daily Star described roads in the Bekaa Valley “lined with dark green cannabis fields.”

This year’s pot crop would be “wonderful,” Shamas said. “We moved from 5,000 dunums of cannabis-cultivated land to 45,000 dunums,” he said. (A dunum is about a quarter of an acre.) There is no shortage of dealers to buy the resulting hashish, he said, adding that it was destined for markets in Egypt, Turkey, and Europe.

While Shamas reveled in his anti-government outlaw status, other pot farmers said they had few other options. “We have no other choice,” said Abu Asaad from Yammouneh. “Our region is highly poor and neglected and I prefer planting cannabis to turning into a bandit or a car thief.”

The farmers scoffed at international aid and alternative development programs, saying they had been a bad joke.

“It’s high time international donors realize that their money is not spent to devise tangible agricultural policies, but rather goes straight to the pockets of officials,” Abu Asaad said. “Eradication campaigns are carried out at our expense and used to secure more funds, which will surely be embezzled.”

Meanwhile, to save face, Lebanese authorities may do some Potemkin eradication.

“The police and Army might destroy a small plot of land where cannabis is grown in the next few weeks just to demonstrate that they have not dropped the ball on the matter, but I totally rule out a large-scale campaign,” a source told the Daily Star.