American Drug War 2: Cannabis Destiny, the latest documentary from director Kevin Booth, goes deep inside the past, present and future of cannabis. Produced in association with medical marijuana patient resource UnitedPatientsGroup.com, this film is available for companies and individuals to bring to their cities by hosting a screening.

“We went to the premier in Denver last Thursday and were absolutely thrilled to see the finished product after so many months of production,” says John Malanca, founder and owner of UnitedPatientsGroup.com. “It’s an emotional and enlightening story that we hope will bring about change.” 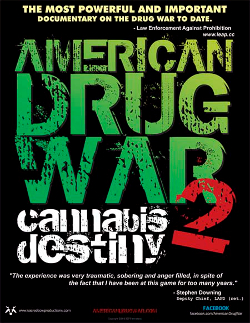 American Drug War 2: Cannabis Destiny tells the story of marijuana through the ages – from being completely unaccepted and regarded as a harmful drug, to being used as a treatment for cancer symptoms. It shows how far cannabis has come over the years, and how far it still has to go.

Much of the film follows the journey of 2 year old Cash Michael Hyde, the youngest and first ‘legal’ medical marijuana pediatric cancer patient in the United States. The Hydes who reside in the state of Montana made headlines when his father, Mike, refused to leave his son’s fate in the hands of the same Western medicine that had proved useless time and time again. After 40 days of not eating and living off of chemo-cocktails to fight his brain tumors, Mike secretly started treating Cashy with cannabis oil.

What happened next was seen as a medical miracle. Cash ended up beating his brain tumors into submission not once, but twice with the help of this oil that his father was obtaining legally through dispensaries in the state.

This all took a turn for the worse when dispensaries in Montana shut down and arbitrary regulations forced Mike to find alternative sources for the cannabis oil that was saving his toddler son’s life. Unable to pool enough oil from caring donors, Cash didn’t make it through his third battle.

“What would have been Cash’s fate if Montana regulations didn’t strip him of the one treatment that was actually working?” asks Malanca. “Cancer shows no prejudice; it will go after the old of the old, the young of the young, the rich of the rich and the poor of the poor. All of these patients need help and have to fight to find it. At what point has America’s drug war gone too far?”

How would the fight against cancer be different if these laws didn’t keep patients from obtaining the medication they need? What is keeping the majority of doctors from advocating for cannabis as a treatment for cancer symptoms? Who is really profiting from these restrictions?

American Drug War 2: Cannabis Destiny seeks answers for these complicated questions and many more. This gripping first-hand look inside the governance surrounding cannabis will be released on June 6, 2013, and the public is invited to bring it to a theater in their city.

Companies, organizations, individuals and anybody interested in sharing this story with their community can host a screening at a theater of their choice at no cost to them. In fact, if over 50 – 70 people attend the screening, the host gets a percentage of the profits.

“This is a great way to promote your brand, company and organization, or to just host a unique event for your friends,” says Malanca. “Your name will be on the Events List and it doesn’t cost you a thing. This is your chance to be a part of something big – something that has the potential to change many, many minds.”

“Be part of the global community that will bring the truth about Medical Marijuana to the world.” Kevin Booth – Director, ADW2: Cannabis Destiny

For information about how to host a screening of American Drug War 2: Cannabis Destiny, visit http://www.unitedpatientsgroup.com/spotlight/detail/American-Drug-War-2

While most online medical marijuana sites cater to patients already familiar with medical marijuana, the UnitedPatientsGroup.com website is a comprehensive and easy-to-use information source for people of all ages and experience levels, from novice medical cannabis users to experienced industry professionals. The site’s News, Resource, and Blog pages introduce new patients to the ins and outs of medical marijuana healthcare, while helping experienced providers stay abreast of the latest developments in CBD therapies.