Sunday, 5 February 2023
You are here: Home High Times’ Cannabis Cup to be held in U.S. for first time

High Times is bringing its Cannabis Cup competition for recreational marijuana to Denver April 20-21, the first time the event has been held in the United States. For the past 25 years, it’s taken place in pot-friendly Amsterdam, where coffee shop owners and seed manufacturers compete for the title of Best Bud in The Netherlands. 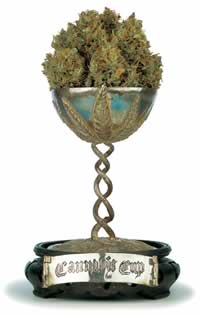 But Colorado is now more liberal about marijuana than even Amsterdam — where it’s illegal to grow pot in the Netherlands, it’s a constitutional right in Colorado. With the passage of Amendment 64 in November, adults 21 and older can possess up to an ounce of pot, grow a limited number of plants and smoke weed with virtual impunity, as long as it’s in private.

Although a system for buying and selling recreational marijuana is still being worked out by a special task force that will offer recommendations to lawmakers next month, a smattering of bring-your-own pot clubs have sprouted up around the state.

But since there are no legally recognized recreational growers yet, strains entered in the Cannabis Cup will come from Colorado’s robust medical marijuana industry, said Bobby Black, a senior editor at High Times.

“Being that there isn’t really a system in place yet for sales, we’re sticking with the models that work,” he said.

Read the full story at dailycaller.com