Greetings from Anonymous and Team Vendetta,

As many are aware, Operation Cannabis 420 is a grass roots effort to bring all who use cannabis together for the purpose of legalization. Our efforts have been largely successful in terms of raising awareness and getting the word out. Our video and press releases for Operation Cannabis 420 – Phase 1 have reached countless numbers of people thanks to the internet and the pro-cannabis media. The support we have garnered for this operation is better than we could have dreamed. 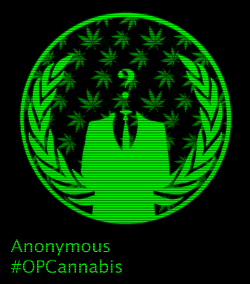 Now, we would like to welcome you all to Operation Cannabis 420 – Phase 2! In this phase of the operation we will be focusing on two objectives: 1) Organizing several worldwide marches for cannabis legalization, the first of which is scheduled for September 30th and 2) Bringing to the forefront the “narco-warriors” (as they have come to be known). These are primarily the police unions, the private prison contractors, big pharmaceutical companies, the alcohol and tobacco industries, the corporate lobbyists for these organizations and the politicians who accept payoffs to legislate in their favor. These are the people who have a financial stake in keeping cannabis illegal, and are willing to spread lies, incarcerate cannabis users and ruin people’s lives. No more. We are calling them out and will not rest day or night until they end their unjust war on cannabis users.

This is a wake up call. Every single person who uses cannabis and every single person who supports our right to do so must take a stand now. We have too many people languishing in jail for marijuana “offenses”. We have too many people who are still ignorant to the facts of this miracle drug. It has been shown that THC can actually kill brain cancer cells, and also slow the rate of regeneration. It’s been proven that cannabis is extremely beneficial to cancer patients who undergo chemotherapy. These are just some of the benefits we are being denied because of the sleazy activity of a greedy minority.

Join us as we venture to put a stop to this once and for all. Organize a march for cannabis in your city/town on September 30th . Talk to everyone. Make people aware. This fight could be won by simple math alone. We have far greater numbers. It’s time to put them to use.