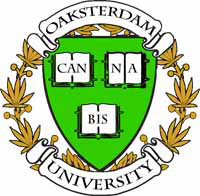 Just after 9 a.m. agents brought out trash bags, some of them overflowing with pot, to a waiting white container truck.

The nearby Oaksterdam Museum was also being blocked off, according to NBC Bay Area’s Christie Smith, as was the Oaksterdam gift shop and the Oakland Cannabis Buyers Cooperative.

In all, at least four locations were sealed off by the feds.

Oaksterdam is considered by many as the heart of California’s pot legalization movement.

Officials on the scene were not commenting on their purpose other than to say that it was part of “an ongoing investigation.” Internal Revenue Service spokeswoman Arlette Lee said that the investigation was under seal in a Northern District Court.

Oaksterdam is a cannabis college has been in business since 2007.

It was founded by Richard Lee, who was the main backer of the California ballot measure defeated in 2010 that would have legalized marijuana in the state for recreational use.

It’s website says it “provides students with the highest quality training for the cannabis industry. Our faculty is comprised of the most recognized names in the California cannabis legalization movement.”

Check back for updates.

By Lori Preuitt and Christie Smith