Tonight, police in Lampeter ordered the poster shown to the left is to be taken down or license would be withheld for a forthcoming Sicknote gig in Lampeter. The reason they gave was that the picture ‘incites drug use’. 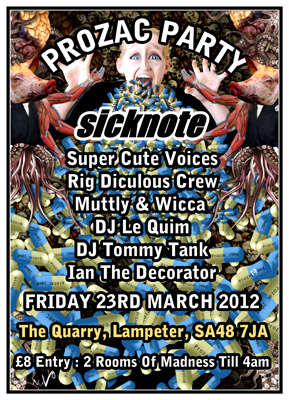 The artist, Norris Nuvo told us:

“They also insisted that the picture be removed from ‘the Internet’ I think they meant Facebook as I don’t think that a copper from a small Welsh town has the power to censor the Internet.”

“I realise that my artwork is of an adult nature and often contain graphic and sometimes violent imagery, it is my art; however I do not feel that the picture incites drug use as the drug in question is prozac which is a prescription drug and not an illegal or controlled drug. Also the character in the image is spewing forth the pills not taking them. Also nothing in the image is actually illegal

I would invite opinion, not on the nature of the picture, but as to its ‘incitement’ to take drugs –  I believe that on one level it is senseless censorship of art, and on another level a bit petty and silly, what do you think?”

Please use the comments section below to let us know what you think. We would have asked Dyfed-Powys Police force to comment but the only time we hear from them is when they are handing out awards to each other.

Please LIKE and SHARE this story. Please be aware that by sharing this story you may be adding a copy of this graphic to the ‘Internet’ and may have a knock on your door at anytime from the Boys in Blue.