There will be a City Centre rally against RAAD in the Guildhall Square this Saturday at 3pm.

A spokesperson for ‘RAAD – Not In Our Name’, Colm Bryce, said: “There is outrage all across the city after two young men were shot on Wednesday night, despite hundreds of people attending a rally in Creggan on Wednesday evening. That rally and the protest against the murder of Andy Allen have begun to lift the veil of silence and fear that RAAD relies on for their cowardly attacks. We need to continue that community pressure and demand that they disarm and disband. It’s time to say, enough is enough. We want an end to the murder, maiming and threats against young people in this City.” 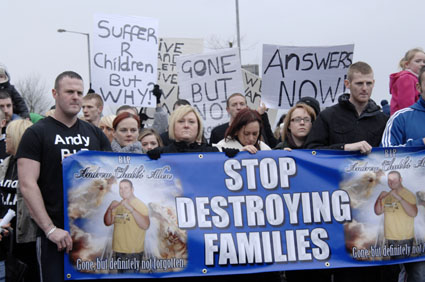 “RAAD have no right to attack people. We aim to show that they can’t claim, as they have tried to do in the past, that they are acting ‘on behalf of the community’. They never have. They are self-appointed vigilantes, who are now shooting people for being involved in a fight outside a bar. We are calling on RAAD to disarm and disband now.”