Unlike Bill Clinton, President Obama admits he inhaled!. “Frequently,” he said. “That was the point.”

People laugh when politicians talk about their drug use. The audience laughed during a 2003 CNN Democratic presidential primary debate when John Kerry, John Edwards and Howard Dean admitted smoking weed. 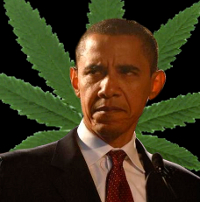 Yet those same politicians oversee a cruel system that now stages SWAT raids on people’s homes more than 100 times a day. People die in these raids — some weren’t even the intended targets of the police.

Neill Franklin once led such raids. The 33-yearMarylandpolice veteran, now executive director of Law Enforcement Against Prohibition, locked up hundreds of people for drugs and felt good about it.

“We really thought that these drugs made people evil,” he told me.

But 10 years ago Franklin decided that drugs — even hard drugs — do much less harm to Americans than does the drug war.

“Drugs can be — and are in many cases — problematic. But the policies that we have in place to prohibit their use are 10 times more problematic.”

The raids helped change his mind. “We end up with kids being shot … search warrants being served on the wrong home, innocent people on the other side of the door thinking that they are protecting their home.”

And the level of drug use remains about the same.

Still, most Americans support the drug war. Paul Chabot, White House drug adviser to PresidentsGeorgeW. Bush and Clinton, told me: “We should be kicking down more doors. … They’re kicking the door of somebody who’s a violent person.”

Violent? People who get high are rarely violent. The violence occurs because when something’s illegal, it is sold only on the black market. And that causes crime. Drug dealers can’t just call the cops if someone tries to steal their supply. So they form gangs and arm themselves to the teeth.

“We have the violence of these gangs competing for market share, and people get hurt,” saidFranklin.

“Some of these gangs have better recruitment programs than Fortune 500 companies. They know what to say to kids.”

People think that if drugs were legal, there would be more recruiting of kids.Franklinsays the opposite is true.

“Prohibition causes that. We don’t have kids on the corner (saying), ‘Pssst, I got a fifth ofJackDaniel’s.’”

Kids rarely peddle liquor, and there’s little violence around liquor sales because alcohol is legal. There was lots of violence before 1933, but that was because Prohibition forbade liquor sales. Prohibition gave us Al Capone.

That’s true. But much less of it. The murder rate rose when alcohol was banned. It dropped when Prohibition was repealed.

“If we were to do away with our drug laws … we know drug usage numbers will skyrocket,” Chabot said.

But we don’t know that.

It’s logical to assume that, were it not for drug prohibition, drug abuse would be rampant. But 10 years ago,Portugaldecriminalized every drug — crack, heroin, you name it. The number of abusers actually declined.

Joao Goulao,Portugal’s top drug official, said that before decriminalization “we had a huge problem with drug use … around 100,000 people hooked on heroin.”

Then they started treating drug use more like a parking ticket. People caught with drugs get a slap on the wrist, sometimes a fine.

Independent studies have found the number of people inPortugalwho say they regularly do drugs stayed about the same. And the best news, said Goulao: “Addiction itself decreased a lot.”

At first, police were skeptical of the law, but Joao Figueira, chief inspector ofLisbon’s drug unit, told me that decriminalization changed lots of minds.

“The level of conflicts on the street are reduced. Drug-related robberies are reduced. And now the police are not the enemies of the consumers!”

And teen drug use is down.

All good news. But in American and in most of the world, the drug war continues, thousands are murdered and in ghettos the police are enemies of the people.

Governments should wake up and learn something from the Portuguese.

John Stossel is host of “Stossel” on the Fox Business Network. He’s the author of “Give Me a Break” and of “Myth, Lies, and Downright Stupidity.” To find out more about him, visit his website, www.johnstossel.com