Can you think of one woman who is so synonymous with cannabis that if you say her name to someone who doesn’t toke up , the first thing that pops into his or her head would be “marijuana”? 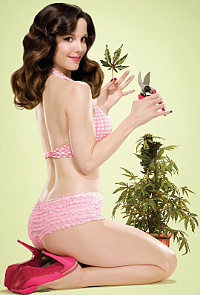 Casually mention Cheech & Chong, Snoop Dogg, Bill Maher or Woody Harrelson in conversation to even the straightest of audiences and I can pretty much guarantee that they’ll assume you’re talking about “getting high.” I daresay there isn’t a woman out there hoisting such a sensi standard. Mary-Louise Parker

When I ask my friends and colleagues about this dilemma, they suggest myself. I can’t tell you how very depressing – though flattering – that is. While I may have managed to secure a tiny modicum of reefer recognition amongst readers of marijuana-related magazines, I can (unfortunately) assert that no one outside of this esteemed group knows  who-the-hell Mamakind is,  and while that may someday change (one can only dream), in the meantime, the Cannabis Queen’s throne remains empty.

Ah! But what of Mountain Girl, Watermelon, Shelby Chong, Mila, Sita, Mishka, Elvy Musikka, Maryjane Green, Angel Raich, Michelle Rainey, Debby Goldsberry or Steph Sherer? Unfortunately, beyond the wide world of weed, the general populace does not yet recognize the Irie nature of these women.

How about “CelebStoners” Sarah Silverman, Cameron Diaz, Lily Allen, Paris Hilton or Adrianne Curry? While these lovely ladies have certainly broadcast their affinity for the herb, I’d hardly call any of them “pot icons,” as none of them embodies cannabis, besides getting caught partaking of it. Of course, when I say Mary-Louise Parker (above) the first thing that pops into most minds is Weeds. But really, it’s only one character she plays that deserves stoner accolades. A star and “CelebStoner”? Yes. A universal pot icon? Not yet.

In Smiley Face, Anna Faris portrayed the first female lead (and driving force) in a marijuana-themed movie in recent memory. While the lame script left something to be desired, her slack-jawed portrayal of a prototypical pothead in dire straits was refreshing, if only for the gender-bending of a traditionally male role. Now, if Faris were to commit to several movies of that nature, she might well be on the road to James Franco-esque notoriety. However, the relatively poor box office take of Smiley Face has most likely quashed that dream like a finger-burning roach in a wet ashtray.

Why aren’t there any true female pot icons? Research shows that most stoners of the daily variety are men and the few female heavy consumers out there that do exist take relatively little interest in pursuing and participating in overt cannabis-related culture. The readers of marijuana magazines, renters of stoners movies, listeners of weed-obsessed music and buyers of pot paraphernalia are predominantly men.

This needs to change. Women should take charge of their own cannabis consumerism and not rely on their male counterparts to buy the dime bags, set up the gardens, and entertain and educate themselves about the diverse universe associated with the most useful plant on Earth.