It was a harsh day for marijuana supporters across the West as ballot initiatives went down to crushing defeats. 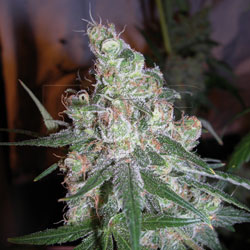 Voters in California on Tuesday said no thanks to Proposition 19, which would have legalized, taxed and regulated marijuana. Meanwhile Arizonans turned down medical marijuana by a thin margin; Oregon voters said no to dispensaries; and South Dakotans, for the second time and by an even larger margin than the first time, declined to legalize cannabis for medicinal purposes.

California’s Prop 19 to legalize marijuana was defeated 54 percent No to 46 percent Yes.. With 97 percent of precincts reporting, Prop 19 was losing by eight points, just over half a million votes (3,891,521 No to 3,349,237 Yes). Servers were overwhelmed Tuesday night at the California Secretary of State’s website.

“Yesterday, 46 percent of California voters stood up to say that marijuana prohibition doesn’t work and we need to try something new,” wrote Steve Fox and Robert J. Capechhi of the Marijuana Policy Project in a statement. “This was the strongest statewide vote ever to end marijuana prohibition, in spite of the fact that the campaign was conducted in a non-presidential election year with a relatively older and more conservative turnout.”

Oregon’s Measure 74, which would have legalized medical marijuana dispensaries in a state which already allows medicinal use of cannabis but provides no legal access other than cultivation, went down to resounding defeat with 567,254 votes, or 58 percent No, and 406,859 votes, or 42 percent Yes.

“Fortunately, this does not make any changes to the current medical marijuana program in Oregon, which allows registered patients to grow their own medicine or have a caregiver grow it for them,” Capecchi and Fox of the MPP wrote in a statement.

South Dakota’s Measure 13, which would have legalized medical marijuana, was defeated even worse, with 199,464 votes, or 63 percent No, and 115,548 votes, or 37 percent Yes. The magnitude of the defeat puzzled activists who, just four years ago, came much closer when the medical marijuana ballot initiative, the first ever to be defeated in a statewide vote, went down 58-42.

“When we lose one blessing, another is often most unexpectedly given in its place.”
~ C.S. Lewis