Nederland became the second municipality in Colorado to legalize marijuana within its borders on Tuesday night.

The mountain town’s residents went further than Breckinridge, which last year legalized possession of less than one ounce of marijuana, and by a vote of 259 to 218, removed all criminal penalties against buying, selling, possessing, consuming, growing and transporting marijuana for anyone age 21 or older. 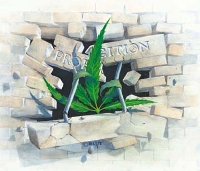 Marci Wheelock, appointed to fill a vacancy just a few months ago, won election to her seat, along with newcomers Kevin Mueller, Chris Perret and Rob Joseph. When a new trustee is appointed to fill the vacancy left by Abu-Haidar, that makes for four new faces on the six-member Board of Trustees.

Boulder County law enforcement officials said the marijuana vote was largely meaningless because state laws against the non-medical use of marijuana remain in effect.

“The issues we focus on are drug-dealing and trafficking, and we don’t get very many cases like that involving marijuana,” Boulder County District Attorney Stan Garnett said.

“Marijuana enforcement for small quantities and personal use is not a priority for our department or for our community, but we’ll continue to investigate and enforce trafficking,” he said.

For “Michigan Mike” Torpie, who gathered the signatures to put the issue on the ballot, such distinctions miss the point.

“It’s entirely symbolic, but it gets people’s voice out there,” he said. “As more and more communities do this, it sends a message to the state legislature that people believe this to be largely harmless.”

Garnett agreed about the political ramifications.

“I’ll pay attention if it passes,” he said Tuesday afternoon, before the votes were counted. “Marijuana enforcement is a sensitive issue, and it’s important to gauge public sentiment.”

Abu-Haidar, the mayor-elect, said she favors decriminalization of marijuana, but she thinks the initiative was a bad idea.

“We don’t need to take this on at a local level,” she said. “We’re a statutory town, so we’re still bound by state laws. We have more important things to worry about.”

Melanie Dougherty, a stay-at-home mother of two who voted to decriminalize marijuana, said she knows overturning local laws won’t change anything, but she still wanted to vote her conscience.

“I just don’t like all the hoopla around it,” she said after voting. “What people do in their own homes is their own business.”

Town Clerk Christi Icenogle said turn-out was high, with 482 people out of a population of a little more than 1,300 people voting. Votes were counted by hand, and results were not released until after midnight.

Abu-Haidar, a stay-at-home mother of two, said that as mayor she would focus on maintaining a positive vision for Nederland, promoting economic development and encouraging cooperation between various entities in the town.

She also said she’d be a more consistent presence on the board than Cheshes, a retired diplomat who has had several extended absences, one related to his wife’s health and two others related to brief returns to foreign service.