GARDAI have seized €12,000 worth of cannabis resin in a raid on a Dublin headshop.

The seizure was made in an operation carried out in the city last Friday, when officers conducted a search of the premises.

The drugs were found stored at the shop after officers from the Kevin Street drugs unit, acting on a 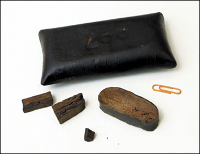 The incident is the first time illegal drugs have been found at a headshop in the capital. Such headshops offer products described as ‘legal highs’.

The cannabis was removed from the premises following the raid and subjected to forensic analysis.

It was valued at around €12,000, it is understood. The find remains under investigation. The seizure was made on the same day as the high profile, but unrelated, fire at another premises, the Nirvana headshop on Capel Street. The blaze at this premises burned down the building and led to the closure of Capel Street to traffic for five days.

Almost €485,000 in cash was recovered from the Nirvana headshop, which was the proceeds of legitimate business at the store. The shop was completely destroyed following last week’s blaze, as was an adult shop located next door. There were no injuries in the incident.

Gardai believe that the Nirvana fire was started deliberately, and are examining whether there is any link between that fire and a recent blaze at the Happy Hippy shop on North Frederick Street.

The blaze at that store is believed to have been caused by firebombing.

Officers believe that petrol may have been spread by two men inside the premises before a fire was set there. A man was treated in hospital for smoke-related injuries following the blaze, but his injuries were not serious.

The issue of headshops and the ‘legal highs’ they sell has hit the headlines recently, with communities expressing opposition to the opening of stores in their area.

Last January in Derry the Real IRA shot the owner of a headshop, and it is expected to issue a warning to the owners of headshops in the Republic in the near future, it is reported.

There is nothing to suggest that dissidents were behind the Dublin fire attacks.