A dad who sent cannabis through the post was nicked after putting his name and postcode on the parcel. 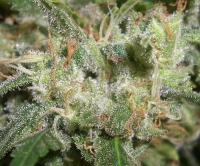 Clinton Bernstein, 55, planned smoking the drugs at his daughter’s in Brighton and was trying to avoid being caught by sniffer dogs at the city’s station.

But sorting office staff became suspicious of the “strong smell” of cannabis.

Bernstein, of Whittlesford, Cambs, admitted having and supplying the drug and was given a community service order at Cambridge crown court.