A Bristol man has escaped a jail sentence after police found 48 cannabis plants in his loft. 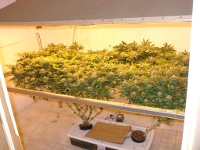 Roofer and plasterer Steven Blacker started growing his own cannabis because he could not afford to buy it as the recession meant work dried up.

Blacker, 30, of Priory Road, Shirehampton, pleaded guilty at Bristol Magistrates’ Court to cultivating the plants at his home.

He also pleaded guilty to dishonest use of electricity.

James King, prosecuting, said: “The police went to the property occupied by Mr Blacker on May 19 in respect of something completely unrelated but whilst there an officer noticed a couple of things that made him suspicious.

“Amongst these items was plant feed when there was no obvious plants at the property. The officer searched the loft he found a total of 48 cannabis plants. Police phoned Western Power Distribution and a employee attended and confirmed there had been an illegal bypass of electricity.

“Mr Blacker did not make any formal admissions in interview but when cautioned he asked how much he would get for having 48 plants.

“He also stated that it was for his own personal use for the year.”

Giles Nelson, defending, said his client had always believed in hard work and had been a roofer and plasterer by trade.

“He had been working from when he was 16 until August 2008 when the work just dropped off.

“He has desperately been seeking work but because of the recession contractors were using their own staff.

“In December 2008 he went to his doctor because he was smoking too munch cannabis. He had always smoked cannabis from an early age but because of the situation it had escalated to dramatic levels which is why he started cultivating his own. He could not afford to buy it.

“Basically after he lost his job things started spiralling out of control.”

Blacker was given a two-year community order with supervision.

He must also carry out 180 hours of unpaid work and attend a substance abuse programme.