Ever wondered which politicians have said what about their past drug use? Some form of drug use is common across all cultures and groups – approximately 40% of Amercians have tried cannabis and over a third of the UK population has too – it is not surprising therefore that politicians from around the world are no different. 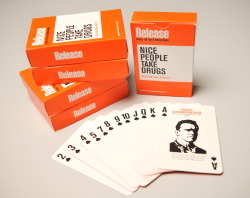 Now you can play your favourite game of cards with a pack that will not only make you laugh, but also lead to some interesting discussions too. Is it right that the US, which arrests 1.5m of its citizens each year for drug offences, locking up half a million of them, should have a president whose own drug use did not get him in trouble with the law?

NB. By featuring in our deck of cards, Release is in no way suggesting that any or all of these politicians are nice people…

A perfect gift for friends, family and colleagues! 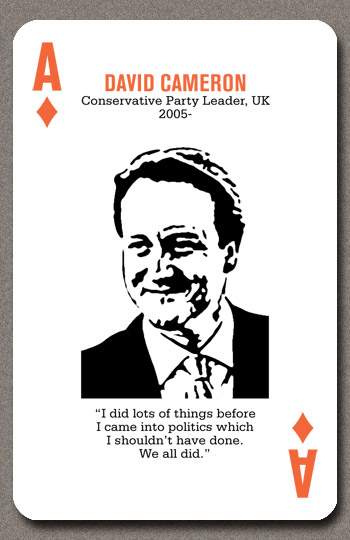 Top quality deck of cards with original design and superior finish. Each card features a politician and their drug confession – from London Mayor Boris Johnson to former US president Bill Clinton – you’ll have hours of fun with this unique pack.

Check out the whole deck here

Release is the national centre of expertise on drugs and drugs law – providing free and confidential specialist advice to the public and professionals. Release also campaigns for changes to UK drug policy to bring about a fairer and more compassionate legal framework to manage drug use in our society.

Release believes that the present regime for the regulation of drugs will be regarded by future generations as one of the great policy disasters of the modern period. These arrangements result in far too many abuses of human rights, fail to protect individual and public health, erode respect for the law, undermine democracy and generate corruption. The War on Drugs is in fact a recipe for a society at war with itself, and this is what we find when we examine the state of global drug control.

Release’s vision is for a society in which the age-old human practice of using drugs is viewed as a part of the human condition. Rather than committing ourselves to the fantasy of a drug-free world—something that never has existed and never will—we should accept drugs as part of life, and educate and regulate to restrict their negative effects. Whether this happens through a reinterpretation and reconfiguration of the present structure, or requires a more radical overhauling of institutional and juridical arrangements, remains to be seen.