Two plainclothes gardai are the latest to be quizzed over links to Ireland’s biggest drugs dealer, ‘the Don.’

The two officers were questioned about passing information to the criminal.

‘The Don’ is one of the State’s most vicious criminals, linked to wholesale cocaine, heroin and cannabis trafficking. 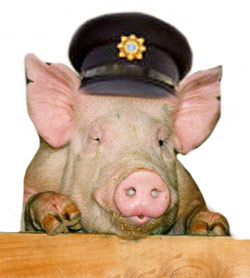 He is also blamed for several cold- blooded murders on Dublin’s westside.

It is also believed the ‘Don’ has access to considerable reserves of cash. The questioning of two plainclothes officers, involved in drugs investigations, follows the arrest last week of a uniformed officer and the discovery of a shotgun in his home.

It has been learned that the shotgun was taken from an evidence room in a garda station. That officer’s girlfriend was also arrested.

The corruption investigation has been growing by the day as the suspected bent officers tried to drag innocent colleagues into the mess.

One of the plainclothes officers who has been quizzed is based in a West Dublin station, and has been involved in drugs investigations. It is believed he has had extensive contact with drugs criminals in the course of his duties. The third officer is based in the city.

The garda, who was arrested on Friday along with his partner, has 20 years’ service with the force under his belt. Detectives are looking closely at the activities of the girlfriend of this suspected corrupt garda.

Officers believe this woman could have been involved in a number of dealings with criminal figures. She is also suspected of being involved in a scam linked to the security industry. In recent days, gardai have raided her workplace.

Her partner is stenuously denying any wrongdoing. However, he is suspected of accessing the Garda PULSE system, which holds information on criminals and ongoing investigations, on behalf of his girlfriend.

Sources believe that the officer may not have realised that his girlfriend was allegedly passing on the information to known criminals.

The activities of three gardai and the woman are now at the centre of this investigation.

It’s been alleged that the three officers were receiving money and favours from criminals, who then used the garda intelligence to target and intimidate rivals and innocent members of the public alike.

The three rogue officers are suspected of proving information to a number of north and west Dublin crime gangs, including tip-offs about potential raids.

It is believed details from hundreds of internal and top secret garda reports may have been leaked. The Herald understands that up to a dozen officers could be facing trouble if the allegations are proven.

“Anything up to 12 members of the force may have been given information of the corrupt trio, not knowing the true purpose of their request,” said a souce.